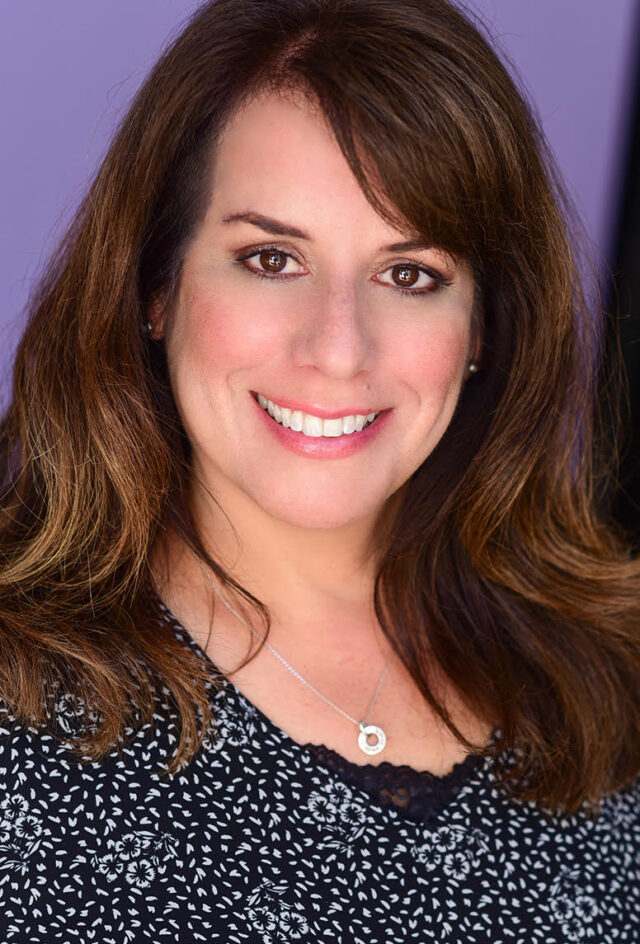 Julie Stevens began performing at age nine when she was cast as one of the orphans in the in the hit Broadway musical, ANNIE. While performing in the show on Broadway, she attended Professional Children’s School and spent summers at the renowned theatre camp, Stagedoor Manor. Julie played Pepper in the final cast when ANNIE closed on Broadway after 2,377 performances.

Julie went on to earn a BFA from New York University’s Tisch School of the Arts and received a Masters Degree in Education from Bank Street College.  She became an on-set Studio Teacher for professional children working in commercials, films, television and voiceovers, which she continued for over 25 years. She also had a thriving private coaching business, teaching acting and singing to young performers.

Julie co-directed and co-produced the award-winning documentary film, “Life After Tomorrow,” which premiered on Showtime and was an Official Selection at over 10 prestigious U.S. film festivals, winning Best Documentary and Best Directing awards at the 2006 Phoenix Film Festival. “Life After Tomorrow” was also featured on “20/20,” as well as a full-page article in the Sunday Arts & Leisure section of the New York Times.

Some of her performing credits include the singing voice of Barbie in the animated feature film, “The Princess and The Pauper,” Cheer Bear in “Care Bears Live,” and several characters in “My Little Pony.” Julie is a member of the Director’s Guild, SAG-AFTRA, Actor’s Equity Association ad IATSE Local 884.

As a manager, Julie guides the careers of performers in all aspects of the entertainment industry. This includes overseeing the day-to-day business affairs of her clients, advising and counseling talent about professional matters and personal decisions that may affect their career, as well as pitching and submitting talent to casting directors for auditions. If your child already has an agent, Julie will work with the agent to make sure that your child is seen for as many auditions as possible. If your child is not yet represented, she will set up meetings with agents and find one that is the right fit for your child. She specializes in marketing and development of your child’s career. She will advise you on your child’s image, headshots, resumé format and content, acting classes, demo reel, website, personal appearances, and career direction. She will make sure your child is accurately listed on IMDB, Actors Access, LA Casting, and Casting Frontier. She will explain how the California child labor laws work, how to set up a blocked trust account for your child and will make sure that your child’s work permit remains current. She will educate and advise you on membership in the performing unions: SAG-AFTRA, and Actor’s Equity.  Julie will also help determine your child’s most marketable skills and the projects in which his or her “type” is the most likely to find work.

Having been in the entertainment industry since childhood, Julie has developed strong relationships with directors, producers, agents and casting directors. Her management style is very unique and personal. She provides many services, free of charge, to her clients. Julie coaches her clients, either in person or online, for both on-camera and voiceover auditions. She prepares clients for their headshot session, suggesting outfit choices, hair and makeup options. She selects (with the input of the client’s agent), retouches and prints client’s headshots and uploads them to online casting sites. She creates and updates client’s acting resumes. She films, edits and uploads self-tape auditions and also creates and edits client’s demo reels. She maintains all of her clients’ online profiles on the casting sites and IMDB. She recommends acting classes and workshops that she feels are important for the training and development of her clients. For those who are not already represented commercially and theatrically, Julie sets up meetings with agents that she feels would be a good match for the client. She teaches parents how the business works and what to prepare when their child books a professional job. Double 19 Productions is a full-service management company covering film, television, commercials, print and voiceovers opportunities.

As an on-set Studio Teacher and acting coach for kids for over 25 years, Julie has developed strong relationships with directors, producers, agents and casting directors.

My management style is very unique and personal. I provide many services, free of charge, that usually cost most actors lots of time and money. I coach all of my clients for every audition, either in person or over the Internet, using Zoom, Skype or Face Time. I train and record my clients for voiceover and animation auditions. I prepare my clients for their headshot session, suggesting outfit choices, hair and makeup options. I select (with the input of the client’s agent), retouch and print client’s headshots and upload them to online casting sites. I create and update client’s acting resumes. I film, edit and upload self-tape auditions and also create and edit client’s demo reels. I create and/or maintain all of my clients’ online profiles on casting sites and IMDB. I recommend acting classes and workshops that I feel are important for my clients to attend. For clients who are not already represented commercially and theatrically, I set up meetings with agents that I feel would be a good match for my client. I teach parents how the business works and what to prepare when their child books a professional job. I submit my clients for auditions for film, television, commercials, print and voiceovers on Breakdown Services, LA Casting, Casting Frontier and directly to my own industry contacts.